A hydraulically balanced simple system, free of any operating or maintenance needs, makes the Elmosa water and seawater intake systems highly feasible and attractive. They function by positively utilizing the natural forces. In doing so, sediment flow is drastically reduced and pressure losses are minimized.

Many different configurations and designs of open seawater intake systems are used in the industry. Cooling water intakes can be divided into two types: Open channel and offshore pipe systems.

The open channel type of intake system used to be the most common, usually located on the shore of a water body. This kind of intake system is usually made of a conveying concrete channel. Simple and complex mechanical screening systems are always included in these types of intake systems. The size of the screening system depends on the quantity and type of the suspended matter present in the water. This type of system works with an acceptable degree of performance when small loads of debris are present. It becomes ineffective when the water gets saturated with large loads of debris and sediments such as weeds and sand. The open channel system is going under a phase out on a global scale in favor of the more advanced and effective offshore system.

The offshore type of intake system is common where shallow water and concentrations of weeds are present near the shoreline. The controlling factors of how far should the offshore distance be are:

Dead weeds – their concentrations and especially their patterns of movement – are the most difficult factor of all. The buoyancy of weeds varies according to ambient and atmospheric conditions. Dead weeds travel over the whole range of the water depth. Therefore, the prediction of their movement patterns is almost impossible, especially when the submarine current conditions vary with the water depth.

The problems involved with offshore systems are similar to those of the open channel, but with less severity and lower frequency. Traveling screens in settling basins onshore are still required and intake head cleaning has to be performed regularly. Large quantities of marine life including fish, fish larvae and small live organisms however are obliterated in the process of the intake system operation and maintenance.

There have been a wide range of submerged intake designs and layouts, all aimed at reducing approach flow velocities to help control and reduce the inflow of debris but suffer from excessive level losses and reduced flow rates caused by seaweed, and Zebra Mussels which stick to wedge-wire screen tees and sections in large numbers. Very few systems are designed to limit the impingement of seaweed or lake vegetation, sand, and other suspended matter inflow, which are the main concern among others of the Elmosa Intake System.

NatSep is where whatever sand and debris that may flow into the InvisiHead get naturally separated and settle at the NatSep intake basin. The flow reaching the pumps is clean and free of sand and debris. Cleaning of the NatSep basin is done once or twice a year. Elmosa has discontinued the use of all screening systems including stationary and traveling screens. The NatSep patented design helped eliminate standard screening processes. 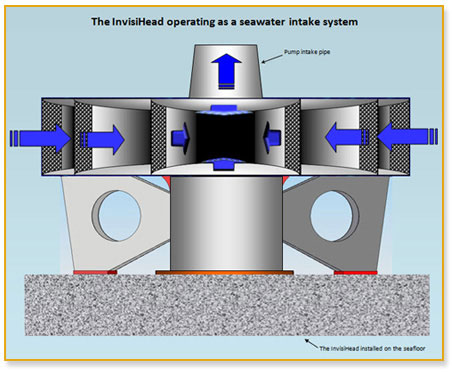 After many years of research and development the InvisiHead system has been optimized and produced. The system is adjustable and virtually hydraulically invisible to suspended mater including fish, fish larvae, sea floor sand, seaweed, and debris. It is engineered to control and drastically reduce the inflow of debris, the ingress of fish, and the impingement of mussels and other marine life and entrained air. It is ideal to be installed in areas designated as fragile and critical such as spawning grounds or special habitats.

By utilizing the continuity equation and the potential flow theory we developed this system. These two hydraulic principles have been used as the main tools for flow calculations and system design optimization. The system also makes use of the natural laws in its operation. Gravity is the only driving force of the flow into the InvisiHead Intake Head System.

The system’s added costs are marginal, and it is usually less expensive and more economical than the conventional systems. It requires no backwash. Zebra Mussels have no effect on the operation of the Intake Head when they attach to it.

With minor alterations, the InvisiHead can also serve as an industrial effluent outlet by which the effluent flow can be dispersed in a way that it inhibits the fluid from rising to the surface and being washed back to the shore.

The clogging of seawater intakes generally occurs as suspended matter such as Zebra mussels, fish, shells, weeds and algae flow into the system. The clogging of these systems is becoming a major problem for installations along lakes and seacoasts. Many remedial solutions have been used like the construction on shore of intricate screening systems that require skilled personnel for operation and maintenance. Such skilled technicians are in short supply in many countries. To keep clean water flowing especially were seaweed occurs in large quantities, some highly automated systems have been used. These also require highly skilled staff to operate and maintain them.

To minimize or completely eliminate the need for automation and to reduce capital expenditures and operation costs, natural laws and forces have been positively utilized to design an adjustable water intake head system. The InvisiHead is virtually invisible to fish, seaweed and other suspended matter in terms of hydraulic effects.

The system is installed 1-30 meters (3-100 feet) below the water surface, away from waves and wave action. Before examining the details of the the InvisiHead, it is worthwhile to shed some light on traditional intake system techniques.

Many intake systems have either proven to be very costly to build, operate, and maintain; or have involved a great deal of guesswork that produced less than optimal results. Offshore intake systems can be upgraded and highly improved by a balanced and well-designed intake head system fully utilizes the potential flow principle in guiding water particles in smooth, uniform streamlines into the intake head. The InvisiHead Intake Head System is divided into four flow phases:

It was a meticulous task to tune the InvisiHead and to divide the through flow regime into four sequentially mating phases. This process led to what the InvisiHead is. Super smooth flow transition from one phase to the next to lead the flow through into the pipeline upstream end made the head virtually invisible in hydraulic terms to suspended matter. There where the InvisiHead borrowed its name.

Water particles start to move toward the Intake Head from all directions with a velocity of about 0.0027 m/s (0.009 fps) max. 5 meters (15 ft) away from the Head entrance. It rises to 0.03 m/s (0.1 fps) max. one meter (3 ft) away. The final entrance velocity is 0.09 m/s (0.3 fps) max. Natural currents, generated by thermal and density differentials, tend to have velocities much higher than these approach velocities. The pressure drop around the InvisiHead due to the suction caused by the head deferential at the intake settling basin located onshore is thus negligible, and does not disturb debris or cause it to travel toward the InvisiHead. This makes it virtually nonexistent as a sink point, and thus hydraulically invisible to suspended matter.

This phase extends from the down-stream end of the guiding vanes to the inlet of the intake pipe. In this phase the flow proceeds smoothly toward the inlet and accelerates to reach steady state, that is the velocity of the flow prevailing inside the intake pipe. It is set a lab tested predetermined ratio of the InvisiHead entrance velocity providing smooth transition and eliminating any potential for eddies or vertices, thus reducing pressure losses and in turn allowing the use of smaller intake pipes. The depth needed for the settling basin onshore would also be reduced due to the reduction of the differential head required at the settling basin to drive the needed flow capacity.

The Intake Head dimensions are all based on the average steady flow velocity, thus an adjustable intake head designs and construction were made possible. In standard practice, a reasonable entrance velocity is usually chosen with a known flow rate. The area of the intake head opening is thus calculated using the continuity equation. Either the height or the diameter/width is assumed and then the other dimension is calculated. No assumptions are made in the InvisiHead Intake Head system design and sizing. All values are calculated since they are all interdependent.

The InvisiHead system works as an excellent offshore submarine outfall. It diffuses the effluent in such a manner that it is not allowed to rise up to the surface and be waved back – no recirculation. The dispersed effluent mixes with the ambient deep water and in a short time assumes physical and chemical properties similar to those of the surrounding seawater, allowing the effluent to stay below the surface without negative impacts on plant operation or on the local environment.

The InvisiHead works as an efficient heat transfer system when used as a power plant cooling water outfall. It ensures adequate mixing and efficient heat dispersion. The heat plume does not reach the surface and it is confined to the area close to the point source – the crown of the outfall. Heat, TDS, or sewage sensors installed a few meters away from the outfall diffuser will register no change in their readings. Length of outfall is no longer a necessity.